A few days ago, our good friend Jonathan Stasko invited my wife and me to join him in his annual tradition of painting the sunrise on Easter morning. Unfortunately, since Jonathan lives in New York state, we couldn't join him in person, but we did so in spirit.

When the alarm rang at 5:40 this morning, I was certainly not in the mood to paint, but I pulled myself out of bed anyway and staggered around a bit until I started to wake up. Fortunately, we had prepared all our gear last night, and my sweet wife had made muffins, so we could just grab everything and go. After a quick stop at Starbucks to grab two coffees, we were on our way.

I began painting before the sun rose and made the mistake of starting out too light. When the sun appeared, I had no values left to make the sun bright enough! As a result, I had to darken everything else. Aside from this setback, and the annoyance of my coffee going cold too fast, and the humbling fact that Andrea made two paintings in the time it took me to paint one, it was a great time!

Jonathan inspired us to adopt this tradition as our own. We hope many other artists will do the same, in celebration that our Lord Jesus Christ is no longer in the grave, but is risen indeed! Happy Easter, everyone!

You Be the Judge Art Contest 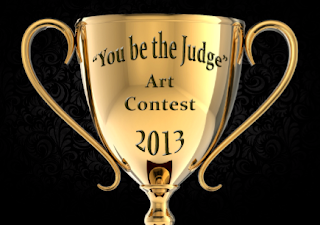 For those who haven't heard about the amazing online art contest "You Be the Judge," I would like to spread the word! Between Feb 18 and May 26, there are seven bi-weekly rounds, with 15 finalists chosen in each round. True to its name, "You Be the Judge" relies on online viewers to vote on the finalists' pieces they wish to move on to the final round. The contest is open to all artists worldwide and offers a Grand Prize worth over $10,000. Furthermore, it's FREE TO ENTER!

The Grand Prize Package is made up of valuable offerings from a huge list of top-name sponsors. It includes $600 tuition to the Scottsdale Artist's School, a signed lithograph and books by Richard Schmid, a full-length article in Artists On Art Magazine, DVD's by Weistling, Gerhartz, Quang Ho, Christensen, Bowler and Brian Neher, ads in national art magazines, multiple gift cards from art supply companies, and more! For the complete Grand Prize Package, visit here.

To find out how to enter, visit YouBeTheJudgeArtContest.com. The deadline to enter is April 30, so before it was too late, I wanted to pass this on to anyone who's interested (and with a prize package like this, who wouldn't be)!
Posted by Adam Clague 0 comments

Email ThisBlogThis!Share to TwitterShare to FacebookShare to Pinterest
Labels: News

On Saturday, Andrea and I made a four-hour journey southwest to the renowned Gilcrease Museum in Tulsa, Oklahoma. The Missouri Valley Impressionist Society, a painting group we belong to, had planned an outing there to see an exhibit of nearly 100 works by landscape painter Edgar Payne (1883–1947). Previously in two Californian locations, this is as far east as the exhibit will come before ending March 24. Andrea and I decided to take advantage of the opportunity while we could, and it was absolutely worth the trip!

Payne was born in Washburn, Missouri, but eventually settled in California. He painted extensively along the coast and helped found the Laguna Beach Art Association. He also traveled to and painted some of the most beautiful and varied landscapes on earth, including the American Southwest, the Swiss Alps, Italy and France. Each section of the exhibit displayed work from a particular time and locale.

It was evident that Payne had a passion for the grand and epic, and his brushwork was typically bold and very thick. But much of the strength of his work comes from the simple-but-strong compositional designs that support his scenes. I was awakened to the importance of creating stronger value patterns in my own work. I was also stunned by the incredible illusion of depth Payne established. By reserving the darkest values for foreground elements and painting mid-ground and distant elements with progressively lighter values, Payne infused his work with an amazing sense of atmosphere. This was especially evident in his paintings of the Sierras, which were Andrea's and my favorites. It seemed like we were not looking into frames, but rather through windows.

Below is a short video trailer for the exhibit.


Andrea and I also loved exploring the Gilcrease's permanent western art collection, which includes works by Frederic Remington, C.M. Russell, Frank Tenney Johnson and Thomas Moran, among many others. When we returned home to Kansas City around 11pm, we were tired, but after a full day of absorbing such incredible works of art, we also felt revitalized and truly inspired!